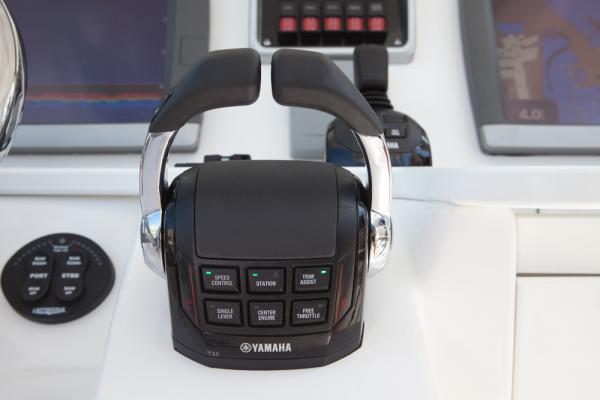 Yamaha Outboard debuted its Helm Master system to the media this week at its test facility on the Tennessee River in Alabama. Much more than just joystick steering, Yamaha’s Helm Master represents the next step in boat control systems, I believe.

Yamaha calls it a “fully integrated boat control system.” Remarkably, there are no cables or hydraulic hoses emanating from the helm. Instead, all components – and there are a bunch of them – are tied together with digital electronics. This includes electronic steering control via wheel or joystick for twin or triple Yamaha outboards.

Helm Master also interfaces with the engine tilt and trim, allowing the captain to program a new Trim Assist feature to trim the engine to preset levels at various rpm points. There is also a Y-Cop theft-deterrent feature built into the system.

The Helm Master system will be available only from Yamaha-partner brands in a select number of new boat models powered by Yamaha’s 4.2-liter V-6 outboards and the F350 V-8 outboards. Boat buyers will be able to see and try the Helm Master system for the first time at the Miami International Boat Show in February 2013.

So how does the joystick perform? In a word, marvelously. I got a chance to try it out in docking situations with both triple F350s on an Everglades 355T and twin F350s on a Grady-White Freedom 335. I found that it does require a different mindset from wheel-and-throttle maneuvering, but once you get your head around it, the joystick is fun and easy to use in close quarters.

The secret is to focus on the target – where you want to put the boat – not the engines or even the joystick. You also need to remember that boat will pivot on the point where you are standing (accomplished by twisting the joystick). In addition, avoid returning to neutral as you might with conventional controls; simply continue to point the joystick in the direction you want to the boat to travel, making corrections without returning to neutral, until you there. With the Yamaha joystick, neutral is not your friend.

A 4-mph current combined with a 5-mph wind (in the same direction) on the Tennessee River during our trial, and this gave me a chance to compare the twins to the triple outboard when using the joystick. I definitely preferred the trips, as it gave me that much more power and blade area when maneuvering against the current, though in both cases I needed to use the “High Mode” on the joystick control to run the rpm progressively higher in such challenging conditions.

Look for Helm Master-equipped boats to start showing up at dealers beginning in March 2013. Yamaha was mum on the cost of the system, as prices will be set by the boat-builder partners as part of the overall retail price of each boat.