Maine boatbuilders work hard at evoking a message of traditional value and heritage in marketing their craft. But beyond those magazine images of hand tools, varnished wood and polished bronze hardware hums an industry embracing technology as a means to sales and salvation. 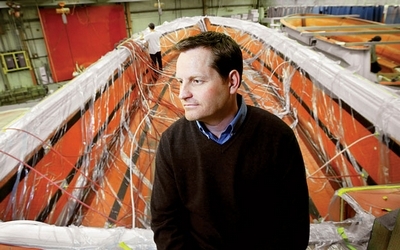 Aaron Crawford, COO of Sabre Yachts, stands near the hull of a Sabre 42 Salon Express undergoing a resin infusion process in the mold room at Sabre Yachts

While there remain a handful of old-school craftsmen producing traditional wooden boats for a mostly connoisseur audience, the larger firms are building hulls from composite materials, installing modern electronics and propulsion systems, and working hard to remain on or ahead of the curve as these technologies evolve.

But product innovation, it seems, will get the industry only so far in a market that is intimately tied to larger economic trends.

“Consumer confidence has a direct influence on new boat sales,” says Ellen Hopkins, communications director for the National Marine Manufacturers Association. “They go up and down together.”

And with the industry just coming out of a deep three-year slump that mirrored the national recession, Maine builders have had to scramble to find new markets even as they work to maintain an edge in their technical skills.

Since the 1960s, most boats have been built of a glass fiber and plastic composite popularly known as fiberglass. In the manufacturing process used by most builders of large boats, sections of glass fabric and various reinforcements and core materials are placed in an open mold, and catalyzed polyester resin is brushed or rolled onto each layer before the next one is put into place.

More sophisticated methods exist, but even after some 20 years of gradual industry penetration, they have been adopted by only 30% of boatbuilders, according to Hank Yeagley of CompositesOne, a national distributor with an office in Rockland. These newer methods involve the use of “closed” molds, with a plastic or silicone rubber bag, a rigid mold top, or both, over the stack of fiber reinforcements. The resin, instead of being applied to each layer by hand, is infused — in other words, it’s sucked into the closed mold with a vacuum pump, saturating all the layers at once. The vacuum also serves to clamp the layers together until the resin hardens.

Among the numerous advantages that Yeagley cites, closed-mold infusion techniques release far fewer volatile organic compounds and hazardous airborne pollutants. This minimizes the need to ventilate the workplace, so manufacturers save on their heating and air conditioning bills. Because they produce a cleaner, healthier workplace, closed-mold methods also improve employee retention. Waste is reduced, along with cleanup and disposal costs. Part quality, consistency and cosmetics are all improved.

One of the local pioneers in closed-mold fabrication is Thomaston-based Lyman-Morse Boatbuilding Co., which has been using the method since 1995.

“It’s a really clean method, both environmentally and in production,” says Vice President Drew Lyman. Because workers are not applying liquid resin by hand, the need for protective gear is minimized, as are the mess and associated cleanup chores.

“The process also removes excess resin from the composite, so parts weigh less,” Lyman continues. “That suits us perfectly, because many of the boats we build are high-performance.”

When Back Cove Yachts began changing to closed-mold techniques five years ago, the company started with small parts.

“As we got more comfortable with the process, the parts grew larger,” says Chief Operating Officer Jason Constantine.

In making the change, Back Cove saw improvements in part quality and cosmetics, along with the same cleaner work environment and reduced airborne emissions that Lyman-Morse reports. But, says Constantine, cost savings are harder to quantify.

“The price of our boats did not change because we became an infusion shop,” he says.

Making the change to closed molding, then, needn’t be an all-or-nothing proposition. Southwest Harbor-based Wilbur Yachts continues to use traditional hand layup techniques in open molds alongside a limited amount of closed molding. Like Back Cove, Wilbur hasn’t realized economic benefits from the new process, but began making the change for “quality parts, cleanliness of the shop and employee welfare,” says owner John Kachmar. Even so, a payoff might not be far behind.

“We’ve had situations where we’ve had to close the office portion of the shop,” he says, because of the powerful and lasting odor of styrene from open-mold production. But with closed-molding, he says, “You don’t smell it and it’s done in half a day.”

Like Lyman-Morse and Back Cove, Wilbur Yachts has been doing vacuum infusion molding, with the fabric and resin contained beneath a plastic bag. But Kachmar anticipates moving to the next level of the technology, with a rigid mold top, “probably in three to five years, maybe quicker.”

Although the rigid-top mold technology promises further improvements in part quality and cosmetics, it is also more complex and costly to implement, and it’s better suited to larger production runs. The timing for making the change, says Kachmar, is “a matter of getting orders, having the dollars to transport to the technology and also having the knowledge.”

Based in Camden, Ben Ellison is one of the nation’s foremost authorities on electronics for pleasure boats. His trawler yacht Gizmo serves as a test-bed for an ever-changing suite of electronics, which he reviews in his blog, Panbo.com, and in several national boating magazines. Ellison recently described a rapidly advancing trend in onboard electronics that presents Maine boatbuilders with another challenge — or opportunity, depending upon how the builder approaches it.

For years, marine electronics have proliferated so that the helm station of a typical upscale boat now looks something like a 747 cockpit, with a vast and confusing array of devices for communications, charting, radar, weather, propulsion system monitoring and control, water depth, tank levels, entertainment systems and other functions. Recently, however, technology strategies have evolved to consolidate these and other functions so that most or all of them can be monitored, or even controlled, from a single touch-screen device.

While this trend originated as custom-engineered systems on super yachts, the technology is being commercialized and somewhat standardized, so that it is rapidly migrating downmarket into boats that constitute the specialty of most Maine builders: custom and semi-custom craft in the 30-to-60 foot range. In one of the latest developments of the trend, various monitoring and control functions can be performed from any location on the boat from a WiFi-linked iPad, or even a smartphone.

“It’s challenging to stay current,” says Aaron Crawford, COO at Sabre Yachts. “And we can’t just stay current. We need to be in front of the curve,” so that by the time a boat’s electronics are specified and installed they’re not already obsolete.

According to Crawford, Sabre maintains expertise in-house to install engine controls, because they are central to a boat’s functionality, and audiovisual systems for which installation requirements are fairly standard across brands and models. But maintaining that same level of in-house expertise for ancillary electronics such as navigation and communication systems is impractical, he says, because of the large number of vendors and the diversity of the products.

“For specific systems we hire a specialist, because the technology’s changing so rapidly,” he says. “Basically we supply the (wiring) backbone within the boat. That way the customer has flexibility between brands and between desired levels of systems.”

In contrast, Lyman-Morse tries to maintain expertise in-house for all major systems.

“I don’t like contracting out,” says Lyman. “There are some great contractors out there, and a lot of yards are going the subcontracting route, but if we can control our schedule and control our quality in-house, that’s what we’re going to do.”

Lyman feels that companies should be cautious about installing the latest technologies with the most advanced capabilities because, once a yacht has left the builder’s service radius, the expertise needed to troubleshoot custom-built or highly specialized systems may not be readily available, and replacement parts may be difficult to obtain.

Still, the demand for such systems is growing.

“Most of the boats that we build in Maine are high-priced,” says Sabre Yacht’s Collins. “People who are buying these boats have a really keen interest in technologies — not only in the electronics that they’re installing but in the propulsion systems… everything. They love the traditional values that are in the boats, but at the end of the day, they love toys.”

Rumery’s Boat Yard in Biddeford engineered and installed an iPad-integrated system on a boat about three years ago, according to owner Sean Tarpey, when the Apple tablet was still the latest thing and before there was much vendor support for marine applications. Now, he says, because better vendor support has made integration more straightforward and systems more robust, the iPad might work to the benefit of the industry as a whole.

“Marine electronics can be very complex, but having them all run on a single device will make it easier for consumers to learn,” he says. The iPad could thus become a kind of gateway to boating, especially for younger people who have little boating background but who are comfortable within the WiFi-linked digital world.