Portsmouth anglers club Members helped Virginia Beach Contender to a 4th place finish in the Virginia Beach Tuna Tournament. It was a 33T Contender that was captained By Max King with Crew members Mike Howard, Brain Hartung, and David Akridge. The entire Crew was Portsmouth Angler Club Members. The Team’s game plan was to go to 26 mile along the eastern shore and target Blue fin than move offshore to target yellow fin tuna if and when they landed a small blue fin (27inches to 47inches CFL) and a medium blue fin (47inches to 73 inches CFL). The first blue fin tuna came pretty early in the day around 8:00 am it was 41 inches Curve Fork Length. The next fish did not come until 2:20pm with only 40 minutes left in the tournament day fishing. The Massive Blue fin hit the Long Rigger with a North State tackle Dr. Jekyll Diver Lures Purple/Black The slack in the line from the outrigger lead most of the crew to believe it was a small fish but than the line started SCREAMING off the Shimano Tiagra 50W It look like it was hook on bottom with Captain Max king on the rod. The reel had very little line when full drag was apply and David Akridge turn the boat around to give chase. The rest of the team was clearing lines and teaser. It was the fire drill that every offshore angler enjoys being apart of chasing down a big fish and being in big tournament. It took the Portsmouth anglers club members crew approx 55 minutes to land the fish it was approx 3:23pm. The lines out time was 3pm but any boat fighting fish past just needed to report the fish was still being fought to tournament committee boat and when it was landed. It was Mike Howard that gentle grab the 130lb Leader to bring the fish into the gaffing range of Brain Hartung. Brain was very patience and waited for the perfect shot and executed the perfect gaffing of a 128lb Blue fin. It was the Boat driver David Akridge that came around quickly with second gaff to ensure the fish could be hoisted over the side into the boat. With the teams tournament day over they headed to the scale to be in 2nd place after day one. With Two more days of tournament fishing the Portsmouth anglers Club crew watched and waited each day Friday and Saturday as one team bump them on Friday and  than again on Saturday to settle at 4th place. Congrad’s to all the winners here are the complete results. 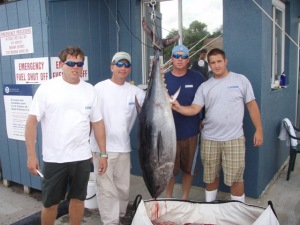